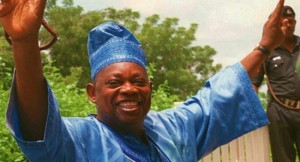 Today marks the 23rd anniversary of the day that has come to be recognised as a defining moment in the history of Nigeria’s democracy and the struggle to break the grip of military rule.

Popularly known as June 12, it commemorates the day in 1993, when the then military regime of General Ibrahim Babangida annulled the country’s presidential election.

Widely acclaimed to be the freest and fairest in the country’s history, the poll is believed to have been won by business mogul and philanthropist, Chief Moshood Abiola.

No reason was given for the annulment of the election, but it triggered a series of upheavals and protests across the country that eventually forced General Babangida out of office.

While the significance of the date is acknowledged across the country, it is mainly states in the south west that actually recognise and mark it with some activities.

The Office of Civic Engagements in the office of the Deputy Governor of Lagos State marked the 23rd anniversary of June 12 with the theme, ‘Democracy And Inclusiveness; A Basis For Good Governance’.


Governor Akinwunmi Ambode, who was represented by the Secretary to the State Government, Mr Tunji Bello, called for true federalism and national unity regardless of religion and ethnicity.

He also called on federal and state authorities to show more respect for the rule of law.

In Osun State, civil society groups held a rally in Osogbo the state capital to promote their view that June 12 should be regarded as Democracy Day instead of May 29.

The group comprising civil society organisations, students and market women walked from Ayetoro area to Freedom Park and later moved on to Olaiya junction singing and chanting songs of democracy.

They also asked President Muhammadu Buhari to implement the “farewell to poverty” manifesto of the late MKO Abiola.