Buhari Returns To Nigeria After 10 Days Vacation In London 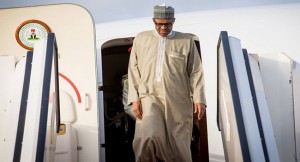 President Muhammadu Buhari returned to Nigeria on Sunday after 10 days official vacation to evaluate an ear infection in London.

“I am okay. I am better. You can see me inspecting the guards of honour. Now you can do the assessment yourself,” Mr Buhari told reporters at the airport.

He also said in Hausa language that he was so healthy that he could even engage anyone in a wrestling bout.

The President had travelled to the UK on June 6 to rest and also see an Ear, Nose and Throat (ENT) specialist for ear infection evaluation.

A spokesman for the President, Mr Femi Adesina, had in a statement said President Buhari’s Personal Physician and an E.N.T. Specialist had recommended further evaluation of the ear after they had examined him.

On June 16, the acting President of Nigeria and the Vice President, Professor Yemi Osinbajo, said President Buhari would return to Nigeria on Sunday.

The Vice President said that he spoke with the President and confirmed that he was in good health.

Professor Osinbajo said that there was no need for the President to start rushing back to the country but should spend the weekend there and get back home on Sunday.