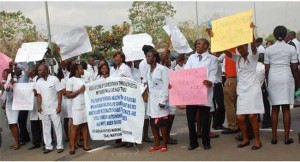 The Nigerian government has asked heads of Federal Government Tertiary Health Institutions to fill the vacancies created by Resident Doctors who have abandoned their training programme in protest of what they called poor welfare.

The directive by the Honourable Minister of Health, Professor Isaac Adewole was contained in a circular by the Permanent Secretary, Federal Ministry of Health, Dr. Amina Shamaki and sent to the Chief Medical Directors and Medical Directors of the Federal Tertiary Health Institutions on Tuesday.

The Circular read: “It has come to the notice of the Management of the Ministry that some Resident Doctors in your establishment have voluntarily withdrawn from the Residency Training Program by refusing to report for training without authorization.

“Public Service Rule, PSR 030402 (e) is relevant. This is in spite of the ongoing negotiations on their demands put forward by the representatives of the National Association of Resident Doctors under the auspices of the Nigerian Medical Association.

“In view of this development, you are hereby directed to replace all the Doctors that have withdrawn their services, with others from the pool of applicants for the training programs in the various disciplines in order not to create ominous gap in training with attendant disruption of health care delivery in your facility”.

According to the circular, the Ministry is working with the panel on the review of the Residency Training Program in Nigeria, led by Professor Wole Atoyebi, the Registrar of the National Postgraduate Medical College, to fast-track the development of a comprehensive blueprint for postgraduate training of doctors in the country.

Activities at most Tertiary Health Institutions have been paralysed as a result of the strike embarked on by the doctors.

Channels Televisions correspondent reports that resident doctors at the Obafemi Awolowo University Teaching Hospital (OAUTH) in Ile-Ife, Osun State have withdrawn their services to patients in the hospital.

The indefinite strike was declared by the National Association of Resident Doctors on Monday to press home the association’s demands for welfare related issues.

In response to offices at different Federal Government’s Tertiary health Institutions were under lock and key, with empty bed spaces seen at different wards.

SERAP Sues Gbajabiamila, Reps Over ‘Plan To Spend Over N5bn On 400 Exotic Cars’

Health Minister Appears Before Senate Over State Of Teaching Hospitals