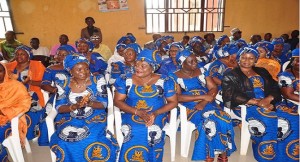 Speaking during the launching of the programme at the Air Force base in Kaduna, President of the Association and wife of the Chief of Air Staff, Hafsat Abubakar, said the training programme was to compliment the Federal Government’s effort in tackling unemployment and poverty especially among the women and youths in the country.

She explained that the programme is geared towards building entrepreneurial skills among youths and women in the barracks, with a view to making them self-sufficient and useful to the society.

According to her, the current decline of the economy in the country makes it necessary for women and youths not to rely solely on white collar jobs, but to look for alternative sources of engaging themselves meaningfully through capacity building and skill acquisition.

Most of the trainees were those whose husbands or parents died while fighting insurgents in the north east.

Some of the beneficiaries said the training would empower them with the necessary skills in becoming self-reliant and to be able to support their families.

The training programme, which will last for a period of 10 weeks, is to increase their capacity building and making them become self-employed and reduce poverty and unemployment among them.

The beneficiaries were being trained in tailoring, beads making, shoe making, ICT, catering, hair dressing, barbing among others.

Several military personnel have lost their lives in the ongoing fight against insurgency in the North East and other related crimes across the country, thereby leaving behind their widows and children.

This initiative of NAFOWA is seen as a welcome development as it will go a long way in complimenting the efforts of the Federal Government in empowering the youths and women, who are regarded as the pillars and future of the nation.