Senate’s Allegation Of ‘Coup Against Legislature’ Is Falsehood – AGF 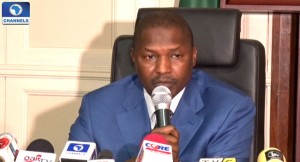 The Attorney-General of the Federation, Abubakar Malami, has described as false, the position of the Senate alleging that the move to arraign the Senate President and his Deputy for forgery portends danger and is a coup against the legislature.

The Senate, in condemning the allegation, had said that it portends danger and indeed, a coup against the legislature with a view to cause a leadership change in the National Assembly.

The Senior Special Adviser to the Attorney-General and Minister of Justice, Mr Salisu Isah, said that the insinuation that the action of the Attorney-General is an interference on the legislature by the executive arm on the affairs of the red chambers of the National Assembly; and therefore a violation of the principles of separation of powers as enshrined in the constitution is also regrettable.

He pointed out that the office of the AGF is empowered under section 174 (1) of the constitution and vested with the power to undertake and initiate criminal proceedings in any court of law in Nigeria.

He explained that by virtue of this power as the chief law officer of the nation, the AGF has simply initiated criminal proceedings for forgery against the affected principal officers in the Senate for altering the Senate standing rules in the Federal High Court and his actions can stand the test of any law since he did not act on a vacuum but on a recommendation by the Inspector General of Police.

He added that the Inspector-General of Police has fully satisfied investigative procedure arising from the petition sent to the Nigerian Police by some aggrieved members of the Senate.