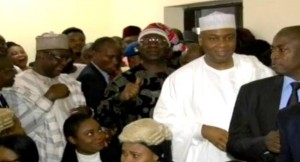 Nigeria’s Senate President, Dr. Bukola Saraki and his deputy, Senator Ike Ekweremadu have pleaded not guilty to charges of alleged criminal conspiracy and forgery of the Senate Standing Rules, 2015.

The two Senate leaders are being arraigned before the Federal High Court along with a former Clerk of the National Assembly, Mr Salisu Maikasuwa and his deputy, Mr Benedict Efeturi.

After their pleas, the prosecutor asked for a date to open his case.

The prosecutor said he had been served with the applications, but stressed that he had filed an affidavit in respect of that. However his clerk is still trying to file the counter affidavit.

He asked for a one hour stand down to be able to collect the documents.

The parties said they were reluctantly conceding to a stand down for one hour.

Earlier, before the proceeding started, the trial judge, Justice Yusuf Halilu, tried to organise the court, by asking supporters of the accused persons to vacate their seats so that lawyers could seat.

He said names of persons that would be allowed in would be called.

Lawmakers supporting the Senate President are also locked outside the court.

The judge, however, said he was not asking anyone to leave but was just trying to organise his court.

He further appealed to everyone to do their best to represent themselves and the law well and asked journalists to ensure that they record exactly what the court said.

Minutes after his statements, the court opened and the lawyers started announcing their appearances.

Another lawyer, Ikechukwu Ezechukwu, however, claimed he was counsel to the first defendant.

After he made the claim, Mr Magaji withdrew his appearance for the first defendant, a decision that the trial judge said was contrary to what was in the document before him.

Mr Magaji, however, insisted that he could withdraw his representation for the first defendant and allow the new lawyer take over.

After their announcements, the prosecutor, Mohammed Diri, told the court that the case was for arraignment on a two-count charge of forgery filed on 10 June.

He reminded the court that a sworn affidavit and the list of witnesses and summary of statements of the accused persons had been submitted.

Mr Diri asked the court to deem the case as filed.

He also urged the court to order that the two-count charge be read to the accused persons for the purposes of taking their plea.

All counsels, however, made a no objection plea.

The affidavit read: “The charges filed through the Office of the Attorney General of the Federation, by the Federal Government, against the senators reads that you, Salisu Abubakar Maikasuwa, Benedict Efeturi, Dr. Olubukola Saraki and Ike Ekweremadu, on or about, the 9th of June, 2015, at the National Assembly complex, Three Arms Zone, Abuja, within the jurisdiction of this court, conspired amongst yourselves to forge the Senate Standing Order, 2011 (as amended) and you thereby committed the offence of conspiracy, punishable under Section 97 (1) of the Penal Code Law”.

Senator Saraki has maintained that he knows nothing about how the rules adopted in the inauguration of the Eighth Senate on June 9, 2015 was formulated.

Saraki, in a statement by his spokesman, Mr Yusuph Olaniyonu, stated that he was not a part of the leadership of the 7th Senate that made the rules in question and prior to his unanimous election as Senate President on June 9, 2015, he was merely a Senator-elect like all his colleagues and therefore was not in a position to influence the rules that were to be used in the conduct of the election.