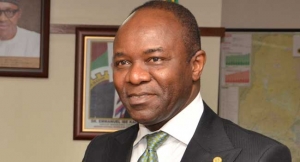 The President of the Petroleum and Natural Gas Senior Staff Association of Nigeria – PENGASSAN, Mr Francis Johnson says the union’s ongoing strike continues until all issues raised before the Ministry of Petroleum Resources and that of Labour are fully addressed.

Mr Johnson told journalists after a closed-door meeting at the NNPC headquarters in Abuja that the decision on whether or not to suspend the strike would be made by the national executive council of the union.

Although the key issue of redundancy in the sector is yet to be addressed at a separate meeting Tuesday with the Minister of Labour and international oil companies, presidents of both PENGASSAN and NUPENG say discussions so far have been satisfactory.

The dialogue which held at the NNPC headquarters had in attendance the Minister of Petroleum Resources, Dr Ibe Kachikwu, the Minister of Labour, Dr Chris Ngige, the Senior Special Assistant to the President on National Assembly Matters, Senator Ita Enang, the Group Managing Director of the NNPC, Dr. Maikanti Baru, and leaders of PENGASSAN and NUPENG.

One of the issues discussed is the implementation of the 2015 Collective Bargaining Agreement between the federal government and the unions.

Also tabled for discussion were the implementation of the Petroleum Industry Bill and the state under which the oil workers operate, especially with regard to lack of power and bad roads.

Before the meeting went into closed-door, Dr. Kachikwu gave the assurance that the meeting would resolve the issues amicably.

The PENGASSAN had last week declared an industrial action over the dispute, while NUPENG postponed its action pending the outcome of this meeting.