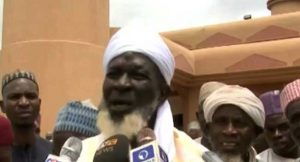 The Kaduna State chapter of the Supreme Council for Sharia in Nigeria (SCSN) has called on the Federal Government, to ban all activities of the Islamic Movement in Nigeria and prosecute their leader, Sheikh Ibrahim Zakzaky.

Rising from their meeting in Kaduna, the group comprising of Islamic preachers and scholars, supported the indictment of the Shiites by the Judicial Commission of enquiry set up by the Kaduna State government to investigate the December 2015 clash between the Shiites and soldiers in Zaria.

The Muslim leaders maintained that the acts of impunity exhibited by the group over the years in Zaria and other states in Nigeria’s northern region, were against the teachings of Islam and the Nigerian Constitution.

They re-emphasised the urgent need to proscribe the Shiites for the interest of peace and security of Nigeria.

The spokesman for the SCSN, Sheikh Muhammad Suleiman, told reporters that failure of the government to deal decisively with the alleged excesses of the Shiites would pose a great security risk for the country.

The Islamic group also called on the Federal Government to stop the herdsmen crisis by checkmating the influx of herdsmen that come into Nigerian from other neighbouring African countries.

They stated that the armed herdsmen that have been attacking and killing innocent citizens in some parts of the country are not Nigerians.