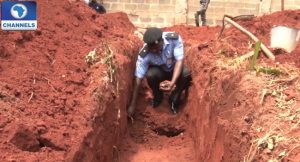 A startling cache of bullets have been evacuated from the earth in Agulu, Anaocha Local Government Area of Anambra State in Nigeria’s south-east region.

The bullets were discovered while the foundation of a building project for a community member was being dug.

The Anambra State Commissioner of Police, Mr Sam Okaula, said several buckets were unearthed and that there were still some left which were yet to be brought to the surface.

Mr Okaula told reporters that investigation had commenced to determine who buried the arms and the reason behind it.

After the discovery, disquiet crept into Agulu, with villages worried about their safety.

At the scene of the discovery, while a worker evacuates the bullets, the State Commissioner of Police said investigation would also focus on when the bullets were acquired and who bought and buried the arms.

Mr Okaula urged residents to provide relevant information that would aid investigation, while also assuring them of the commitment of the police to battling criminality.

He said that the a high powered surveillance would be put in the area to ensure the police got to the root of the matter.

Meanwhile members of the community have said they were in the dark as to who purchased and buried them.