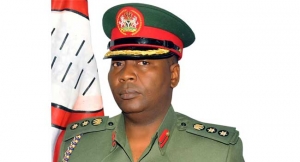 The Nigerian Army has declared three persons wanted in connection with the latest video of the abducted Chibok girls released by Boko Haram on Sunday.

Spokesman for the Army, Colonel Sani Usman, said that the suspects, Ahmed Salkida, (Ambassador) Ahmed Bolori and Aisha Wakil had information on the conditions and the exact location of these girls.

He said: “The Nigerian Army hereby declare the two gentlemen and the lady wanted for interrogation.

“We are relying on the relevant laws of the land and in particular the Terrorism Prevention Act 2011 (as amended) where Nigerians could be punished for failure to disclose information about terrorists or terrorists’ activities.

“This become necessary as a result of their link with the last two videos released by Boko Haram Terrorists and other findings of our preliminary investigations”.

Ahmed Salkida is a journalist and the member of the Boko Haram that spoke in the video said they do not speak with the government except journalists. His inclusion in the list of the wanted persons is not unconnected with the statement.

The army also urged Nigerians to provide useful information on their whereabouts.

Colonel Usman said that the military was also liaising with other security agencies for their arrest if they failed to turn up.

The Boko Haram had earlier on Sunday released a new video of the Chibok Girls.

It showed some girls they claimed were the schoolgirls they abducted from Government Secondary School, Chibok in Borno State, Northeast Nigeria.

News of the video release first emerged on Twitter, with Nigerian Blogger, Ahmed Salkida, claiming it was sent to him by the Abubakar Shekau faction of the Boko Haram.

Since the abduction of the over 200 girls, the Nigerian government has appealed for their unconditional release but the terrorists group said they had been married off.

The military has also made concerted efforts to rescue them, with several appeals made to Nigerians with any information to volunteer to the military or security agencies to enable them rescue the girls.

After their abduction in April 2014, several protests were launched in different countries, with a ‘Bring Back Our Girl’ demand.

Less than 10 of the girls have been rescued since their abduction.