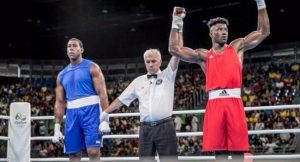 Nigerian boxer, Efe Ajagba gave a promising start to the country’s Olympic boxing campaign with a knockout victory over Trinidad and Tobago’s Nigel Paul in round one.

Ajagba needed two minutes, forty-four seconds to see off his opponent and prevented spectators who were still sorting things out at the gate from seeing the fight.

The Nigerian boxer has now qualified for the quarter finals to face Kazakhstan’s Ivan Dychko who also qualified via a knockout win over his opponent from Azerbaijan.

Ajagba who is the only boxer representing Nigeria in Rio jumped to the rope to acknowledge the crowd’s roaring support before dashing to his coach’s corner to hug Anthony Konyegwachie in celebration.

The Super Heavyweight Boxer who won gold at the 2015 All Africa Games in Congo, Brazaville and a bronze at the 2014 Commonwealth Games in Glasgow, has another chance of moving to the medal’s zone with his next fight scheduled for Tuesday at the Riocentro Pavilion.

The Trinidad and Tobago opponent fell awkwardly on the canvass and the Russian referee did not hesitate to end the fight.

The manner of his fall raised fears when he hit his head on the canvass but rose up and wobbled to his corner. The Lion of the ring, Efe, pumped his fists to the sky enjoying the moment.

Efe’s next opponent is also huge and slightly taller, whose left hook opened a deep cut on his Azerbaijan opponent but coach Anthony Konyegwachie has assured that his boxer will not have any problem against his competitor.

Federer Pulls Off Great Escape Against Sandgren In Australian Open

FA Cup: Liverpool To Face Chelsea In Fifth Round