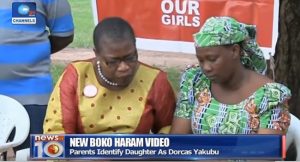 The parents of one of the missing Chibok Girls have asked the Federal Government to ensure the release of the school girls.

Dorcas Yakubu was identified in a new video released by the Boko Haram leadership on Sunday.

With tears in her eyes and the look of helplessness, Mrs Esther Yakubu and her husband were both consoled by one of the conveners of the Bring Back Our Girls Campaign, Dr. Oby Ezekwesili.

Her daughter, Dorcas Yakabu is one of the 218 Chibok Girls abducted by Boko Haram Sect on April 14, 2014.

In the video, Dorcas made a frantic appeal to the authorities to corporate with the terrorist group and exchange the girls for detained terrorist.

Meanwhile, a source in the presidency on Monday affirmed that the Nigerian Army is still in search of the three people believed to be behind the making of the latest video of the missing Chibok Girls.

One of them a journalist, Ahmed Salkida who resides in Dubai is said to have contacted the International Police, Interpol over reports demanding that he hands himself over to the Nigerian Police.

On Sunday, the Nigerian Army declared him and two others wanted, Ahmed Bolori and Aisha Wakil wanted.