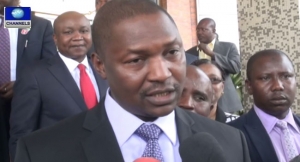 Nigeria’s Attorney General and Minister of Justice, Mr Abubakar Malami, has called for an independent inquiry into how a former Chief Protocol Officer to the Minister of State for Defence, Mr Desmond Nunugwo, allegedly died in the custody of the Economic and Financial Crimes Commission (EFCC).

According to his family, Mr Nunugwo died on June 9, 2016, after he was arrested by the EFCC for his alleged role in a 91 million Naira fraud.

The lawyer to the family, Mr Paul Edeh, led relatives of the victim to the Ministry of Justice, where they had a private meeting with the Justice Minister.

Mr Edeh said that the Minister gave a directive that the issue be investigated and promised to get back to the family in a matter of days.

Wife of the deceased, Mrs Susanne Nunugwo, lamented that she had not been able to see the corpse of her husband since his death two months ago.

She requested that her husband’s name be cleared as he had been declared guilty by the EFCC and was no longer alive to defend himself.

EFCC Gets Final Forfeiture Of N827.6m From NDDC Contractors

NDDC/EFCC: People Have Abused Trust In My Administration – Buhari