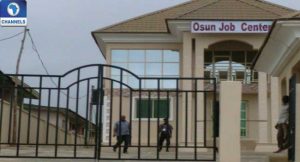 The Osun State government says its new job centre, O-Jobs, has been established to create a link between the employers and employees that are Osun indigenes and residents.

He said it was in fulfilment of a promise to provide jobs for unemployed Youths during his tenure. It complements the earlier introduced “O-Yes Cadets” which employed 20,000 persons.

The Governor explained that the Osun Job Centre would provide free employment support services. It is created by the state government for indigenes and residents to register and post their Curriculum Vitae (CV).

“It also serves as a platform for employers to register and post job opportunities.

“It is an intermediary between job seekers and employers, with the goal of matching the company’s needs and requirements with a job seeker’s skills, interests and experience.

“‎It is settled that government exists to serve the people.

“Before now, we all carelessly depended absolutely on oil, a revenue that we did not contribute anything to it. Oil is no more there for us to depend on. It is from the work that you do that government can earn revenue from,” he told a gathering at the official opening of the centre.

The Osun State Governor further emphasised that “the more the people work therefore, the more revenue can come to the government in form of taxes.

“So I encourage you people to be very active and do your civic duties.

“No government in Nigeria has been able to achieve this feat,” he claimed.

On the outcome of the government’s initial efforts, he said 41 out of the O-Yes Cadets now have their houses.

“I thank God that we have been a part of this success story.

“As weak as we are financially, Osun has the lowest rate of Youth unemployment. I challenge anyone to contest this. This has been achieved because of our youth employment programme. Because of the dexterity and innovation we have employed, we have the seventh national Highest GDP in the nation,” he further claimed.

Governor Aregbesola said: “The job centre will help you identify jobs, groom you for the job. We have created an environment for you and you don’t need to go to Lagos, Port -Harcourt and other states.

“We will look for jobs for you from across that states and outside the country and prepare you for the job and interview so you will have a unique opportunity to get the best job wherever the job is in the world.

“It is a worthy legacy we have decided to give to the people of Osun”.

Earlier, the Commissioner for Human Resources and Capacity Building, Miss Mobolaji Akande, said that the Osun Job Centre was not a job placement agency.

She further explained that the centre was not under obligation to find job or secure employment for anybody.

“It only provides tools and information to help a job seeker succeed in job search,” she emphasised.

The job centre has 62 desk officers working on any curriculum vitae sent by the job seeker before being called up for training.

A website, Osun Job Centre has also been established to collate CV and also provide a platform for employers to check for job seekers.

Please Bring Back My Son, Mother Of Man Who Allegedly Jumped Into Lagoon Begs