I Can’t Use All State Resources To Pay Salaries – Aregbesola 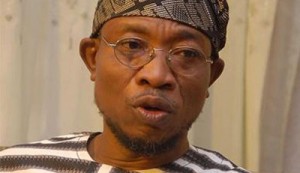 The Governor of Osun State, Rauf Aregbesola, on Tuesday said he cannot use all of the state’s federal allocation to pay workers and pensioners.

Governor Aregbesola speaking at the commissioning of the Osun Job Centre in Osogbo, the State capital, stressed that the development of any state depended on the ingenuity of the leadership to ensure even distribution ‎of resources available.

He added that with a population of over four million people in the state, it is only logical for the civil servants and pensioners to show some understanding with the government.

The Governor made it clear that the inability of the State government to meet its obligation to public servants and pensioners was because the government wanted to meet the development need of the state.

He said that the state’s resources could not sustain the payment of workers’ salaries.

“Some people keep on harping on the fact that we are not paying salaries and I ask them; ‘if we are to use every kobo we have to pay salaries, how horrible will this state be?

“Salary earners and pension earners are 60,000. Osun at the last count has four million people. So, if all we do is pay salary and disregard the needs of over three million people, where are we going to be? It will be a horrible state indeed. It will be a state where life will be difficult and tough,” the Governor stated.

According to him, the only way out would be to spread the revenue of the state affect as many people as possible.

“That is what is known as development.

“So when they tell you that he is not paying salaries, tell them to mind their business. Should we leave it to their very very limited and myopic view, we will have an obnoxious state where life will be brutish and unliveable,”

On his plans for the workers, Governor Aregbesola said: “To make life ‎liveable, we must do what we are doing and that is why we keep on encouraging our workers that we know it is tough with you, but it is not only you. We are all affected. If we can mobilise our citizens, this will be history and by the grace of God, it will be history very very soon”.

Woman Arrested For Allegedly Stabbing Husband To Death In Katsina