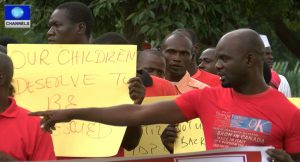 Parents of the missing Chibok girls are asking the Federal Government of Nigeria to swap their daughters with Boko Haram suspects in the custody of the security agencies.

Some of the parents on Thursday joined the members of the Bring Back Our Girls (BBOG) campaign group for yet another match at the end of the 72 hours ultimatum they gave the government.

The campaigners were, however, stopped by the police from gaining access into the Presidential Villa.

They promised to return after 72 hours unless they see what they called persuasive action on the part of President Muhammadu Buhari’s administration.

The terrorist group had on August 14 released a video of the girls held captive, with a demand for prisoner swap.

After the video was released, the BBOG campaigners heightened calls for more efforts on the part of the government and military to rescue the girls.

In reaction to the released video, the Minister of Information, Mr Lai Mohammed, assured the parents of the girls that the government would continue to make efforts to rescue the girls abducted over two years ago.

Over two hundred girls were taken from their school’s dormitory by Boko Haram terrorists while they were preparing for their final secondary school examination.

Less than 10 of the girls have been rescued since they were taken.

On August 22, a former military officer, Sunday Adoba, admitted that the military was aware of the location of the Chibok girls abducted by the Boko Haram terrorists two years ago.

“They are within the Gambalu Dam axis.

“In about late June or early July, we knew some of them were handed over to one Mala Yamari who is an Amir of the sect,” he told Channels Television while answering questions focused on military efforts to rescue the girls.

The Boko Haram group, who were formerly said to be residing within a location called “Camp Zero” of the Sambisa forest, have now purportedly relocated.

Thousands Attend Burial Of Emir Of Zazzau In Zaria