Lagos Govt. Begins Clean Up Of Ikoyi, VI And Lekki 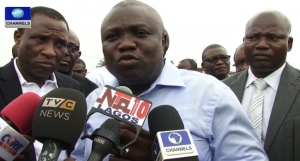 The Lagos State government has begun a move to extend its urban clean-up project to the Ikoyi, Victoria Island and Lekki areas of the state in southwest Nigeria.

To achieve its plan, government has set up a committee to commence the elimination of illegal structures and shanties, street hawkers, as well as those who have converted walkways to trading points and food courts on the island.

Inaugurating the committee at the State House, Governor Akinwunmi Ambode, expressed worry over the abuse of urban planning and environmental laws.

He said this necessitated the decision to embark on a major clean-up of the environment to restore it to its desired form.

Governor Ambode explained that his administration was passionately determined to rescue the fragile environment in the state from avoidable impediments.

The newly inaugurated 16-man committee, headed by the Secretary to the State Government, Mr Tunji Bello, is saddled with the responsibility to commence the implementation of the approved action plan and execute the clean-up exercise among other terms of reference.

The government has given a 14-day ultimatum to those who might be affected by the exercise to vacate the premises.