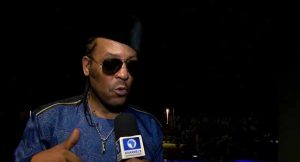 Famous American R&B singer, songwriter and choreographer, Jeffery Daniels, has advised aspiring singers to continue to focus on their strengths and strive to be original.

He told Channels Television that he had noticed that in the beginning, artists try to explore various genre, only to crossover to the dominant pop sound after a while.

Daniels, who was a founding member of the popular 80’s group Shalamar, was also known for his dance and choreography moves, one of which was the famed moonwalk, eventually made popular by Michael Jackson.

Advanced ‘Out Of Nothing’

Between 2010 and 2013, he gained exposure to the Nigerian music industry, as a musical reality television show judge alongside Yinka Davies and Audu Maikori who was later replaced by Charly Boy and later Femi Kuti.

Over the past few years of picking interest in Nigerian music, Daniels has mentored a couple of new talents.

He expressed his surprise at how much the industry had advanced, ‘out of nothing’.

Nigerian music is heavily characterised by dance elements. It is a general believe that the most successful songs are the ones with heavy beats and groovy melody.

However, some also believe that there are only few acts such as Adekunle Gold and Brymo who can garner commercial success from making other genres of music, as the industry is largely monolithic.

I Am The ‘Jesus’ Of Nigerian Music – Terry G