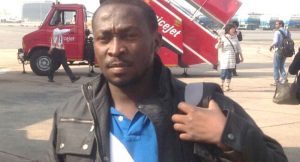 One of the individuals placed on wanted list by the Nigerian Army for alleged link with Boko Haram terrorist group, Ahmed Salkida, has been arrested in Abuja, security source said on Monday.

The journalist, who released a Boko Haram video showing abducted Chibok girls from Nigeria’s northeast, was arrested at the Nnamdi Azikiwe Airport in Abuja, the nation’s capital city.

A source at the Airport told Channels Television that Nigeria secret police officials, who arrested him were aware of his arrival from Dubai through the passengers’ manifest usually sent by airlines to their destinations.

The source said he was arrested at about 4:30p.m. local time by operatives at the tarmac of the airport and had been taken into custody by the security agency.

After the video of the abducted girls was made public, the Nigerian army declared Salkida and two others wanted in connection with the video.

Spokesman for the Army, Colonel Sani Usman, said that the suspects, Salkida, (Ambassador) Ahmed Bolori and Aisha Wakil had information on the conditions and the exact location of these girls.

The girls were abducted on April 14, 2014 from their school’s dormitory in Chibok, while they were preparing for their Secondary School Certificate examinations.

Their abduction triggered wide protests across nations, with a slogan, “Bring Back Our Girls”.

Giving reasons for declaring them wanted, Colonel Usman said that two recent incidents had pointed to the fact that the suspects were connected to the terrorist group.

In his reaction to the declaration by the army, Mr Salkida, who was not in Nigeria at that time, said that he was prepared to return to Nigeria and had indeed kick started the process to honour the invitation.

He pointed out that his return home would be quickened if the government could fund his trip.

“Clearly, my status as a Nigerian journalist, who has reported extensively, painstakingly and consistently on the Boko Haram menace in the country since 2006 is an open book known to Nigerians and the international community,” he said.

The other persons that were declared wanted had turned themselves in for questioning.