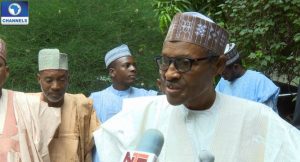 President Muhammadu Buhari has promised Nigerians again that his administration would correct the maladministration of past government.

Addressing reporters in his home town, Duara in Katsina State after Eid-el-Kabir prayers on Monday, President Buhari decried what he inherited from past administrations, pledging to correct them with the support of Nigerians.

On what the government is doing to address the economic recession and provide job for the unemployed Nigerians, President Buhari highlighted that the Central Bank of Nigeria and the Ministry of Agriculture had established a scheme that would support farmers and ensure that young Nigerians were involved in the diversification of the economy through increase in agricultural produce.

“Now, the youths that have land, the Central Bank and the Ministry of Agriculture have done something about it.

“Those that do not have land that are graduates there is an arrangement made by a committee under the vice president.

“Really, we have plans, we know what to do and we want Nigerians to do their best too,” he stressed.

Citizens of Daura had lined up to behold the president’s convoy, as it meanders its way to the prayer ground.

The President joined other Muslim faithful at the Eid prayer ground for the day’s prayers.

Prayers were followed by the major event of the day – the slaughtering of the sacrificial ram.

President Buhari’s appearance in his country home no doubt is a thing of joy to his kinsmen and they could not hide it.

He had in an Eid-el-Kabir message congratulated Nigerians, particularly Muslims on the occasion of the Eid-El-Kabir, saluting their steadfastness in spite of the difficult economic times Nigeria is going through.

‘We Ate Only Once In Two Days, Defecated In The Same Place We Slept’ – Kankara Schoolboys