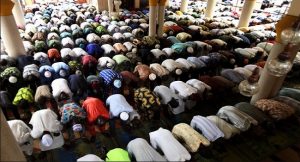 The Deputy Chief Imam of the Abuja National Mosque, Ahmad Onilewura, has called on all Nigerians on the occasion of Eid el-Kabir celebration to tolerate one another and contribute to national peace and unity.

He made the call at the Muslim National prayer ground in Abuja on Monday, where he urged both Muslims and Christians in Nigeria to unite and peacefully coexist.

According to him, tolerance, self sacrifice and respect for one another, irrespective of one’s religion is one major lesson the festive period provides.

He also explained the significance of slaughtering of the ram, a regular feature during the celebrations.

The Eid-el-Kabir is being observed under heavy security presence, especially in the nation’s capital, Abuja.

A combined team of armed police men, Nigeria Security and Civil Defence Corps and the Department for State Service were seen at difference prayer grounds.

The Inspector General of Police, who was also one of the dignitaries that observed their prayers at the Muslim prayer ground in Abuja, explained the reasons behind the heavy deployment of security personnel.

The Senate President, Dr. Bukola Saraki, and the Kwara state governor, Abdulfatah Ahmed were at the prayer ground in Ilorin, the state capital for the Eid prayers.

While security officials made it impossible to get the Senate President to speak to journalists, the state governor sued for peaceful coexistence among all.

The Yobe State governor, Ibrahim Gaidam used the occasion to encourage Muslims to pray for the country, while his counterpart in Adamawa State, Mohammed Jibrilla assured citizens that Nigeria would soon get out of the hard times.

According to Islamic teachings, the Eid el-Kabir celebration is an annual event to commemorate the act of faith of the patriarch, Ibrahim who obeyed Allah when he was asked to sacrifice his son.