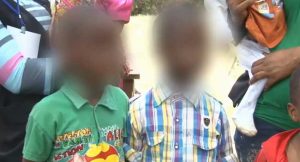 The Delta State Police Command says it has arrested one Abigail Nwakama also known as Madam Cash and nine other suspected child traffickers in connection with child stealing and trafficking in the state.

Parading the suspects at the state headquarters in Asaba, the Police said that most of the suspects have confessed to the crime and this has led to the recovery of about 12 children.

Various cases of child theft have been reported severally in Okpanam, an outskirt of the Delta State capital, Asaba including the case of seven-year-old Moses Iloba who was reported missing a few days earlier.

Moses Iloba, son of Mr and Mrs Iloba who resides in Okpanam Delta State had been reported missing since September 6, 2016

According to his younger sister, he was lured by an unknown lady who pleaded with him to help run some errands.

“We have not found our child; everyday they say come back today, come back tomorrow. I don’t know what to say,” the mother of Moses expressed her anguish at the situation.

Moses was not among the recovered children but the Iloba family were hopeful that their son would be back and reunited with them soon.

Meanwhile, the Police have encouraged the parents of missing children to contact the Police to identify their children among the rescued.

The Police also paraded other suspects including suspected cultists, robbers, murderers and kidnappers.

Another notable arrest was that of one Chukwudi Ijoma who was suspected to have raped and killed one Blessing Ogammar, who before her death was reported missing.

Riffles, locally made guns, ammunition, cartridges and phones were some of the items recovered from the various arrests made.