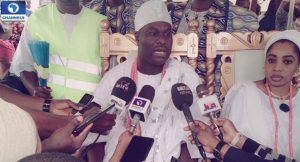 The programme is worth millions of Naira and anchored by Motherland Beckons and has as part of strategies to push residents’ involvement a cleaning competition among all the streets in Ife.

‎The cleanest street in Ile-Ife and its environs when chosen would receive a cash reward of 100,000 Naira every month.
‎
At the commissioning of the project held in front of the Ile-Oodua, Enuwa Square in Ile Ife, Osun State, Oba Ogunwusi, who was accompanied by his queen, Olori Wuraola Ogunwusi, said the provision of the two new Leyland trucks and waste disposal bins was to encourage the people of Ile-Ife to take the issue of sanitation very seriously.

He declared that “environmental sanitation or cleanliness is crucial in the drive to make Ile-Ife a tourist destination. And Ile-Ife has to be prepared ahead for the millions of tourists expected to visit the ancient historical city from next year”.

According to him, this is why about 200 youths have been selected and enlisted for the take-off of the programme in collaboration with Local Government Authorities.

Oba Ogunwusi, therefore, urged the women and elders to co-operate with them in order to make it successful.

“We should not leave every responsibility to the government alone. We are the ones that voted for those in position of authority. Thus, we are also part of the government. Therefore, we need to support the governments at all times to make our environment clean, neat and healthy.

“It is part of Ife anthem to uplift Ile-Ife. It is when we uplift our community that the government would be encouraged and give necessary assistance to our community,” the Ooni told reporters.

He noted that the event was a great one before God. “This is because God dwells in cleanliness. And that is why the event is special to me,” he highlighted.

Oba Ogunwusi emphasised that environmental sanitation and cleanliness in all ramifications should be properly observed and carried out in all the nooks and crannies of Ile-Ife.

He encouraged all the residents to ensure that Ife city became the cleanest city in Nigeria.

He said that the programme would begin from each household.

“It is the women that ensures cleanliness of the home. Therefore, all the women in Ile-Ife and environs should give priority to environmental sanitation and cleanliness, the monarch added.”

He also urged the Environmental Sanitation Vanguard in the palace to ensure the replication of the clean palace environment observed in the last six months despite visits by thousands of people daily to the palace.

Earlier, the Project Manager, Mr Tunde Awoyemi, while addressing the crowd at the event said that Ooni Ogunwusi had challenged the youths, women and elders of the community to be actively involved in environmental sanitation and cleanliness of Ile-Ife and environs.

He added that the two new Leyland trucks and waste disposal bins provided by the monarch would go round the city to collect refuse and dump them at a designated dump site where it would be separated for recycling, converting it to wealth. “It would be waste to wealth programme,” he stressed.

They said that they had chosen wisely in picking Oba Adeyeye Ogunwusi as their king.

They also appealed for support and co-operation of all and sundry in Ile-Ife and its environs to make the programme successful.

This initiative is coming days after flood destroyed property in the state’s capital city, Osogbo, leading to the death of one person.

The incident had been blamed on indiscriminate waste disposal by residents, something that the Ooni is trying to address in Ife town.

Dredging work has, however, started in Osogbo to guard against recurrence of the incident that occurred after flood warning was issued.