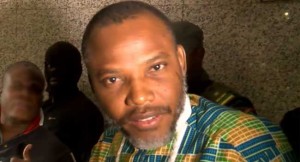 A Federal High Court judge in Abuja has withdrawn from the case filed by the federal government against the self-acclaimed leader of IPOB, Mr Nnamdi Kanu.

Justice James Tsoho said that he would return the case file to the Chief Judge of the Federal High Court, Justice Ibrahim Auta for reassignment.

The leader of the Indigenous People of Biafra had earlier petitioned Justice Tsoho before the National Judicial Council over alleged judicial rascality.

At the resumed trial, Mr Kanu’s lead counsel Chuks Muoma brought an application claiming that the court was biased in the manner it has so far handled the matter.

In his ruling, Justice Tsoho said that he had no personal interest in Kanu’s trial and would be returning the case file for reassignment.

Kanu alongside his co-accused, Benjamin Madubugwu and David Nwawuisi are facing a six-count charge of treasonable felony, brought against them by the federal government.