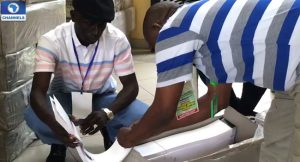 Compilation of results in the Edo State governorship election is ongoing at the different local  government areas across the state, with the electoral body getting ready at the headquarters to receive the results.

The compilation started after voting and counting of ballot papers at different polling units.

The exercise is said to have been largely peaceful. However cases of ballot box snatching have been reported at some polling stations.

Over 1.9 million people were registered to vote in the poll, which was supervised by over 18,511 officials of the Independent National Electoral Commission (INEC), with 19 candidates contesting for the position of governor.

Earlier, an official of the electoral body, said polls went on smoothly.

But the governorship candidate of the All Progressive Grand Alliance (APGA), Osaro Onaiwu, called for total cancellation of the poll.

He claimed that there were cases of financial inducement and intimidation of Party loyalists.