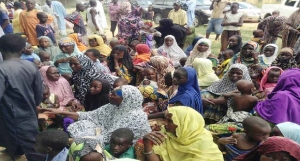 The Nigerian Senate has launched an investigation into the utilisation of funds allocated to the Presidential Initiative on North East.

The lawmakers said the probe was to ameliorate the conditions of Internally Displaced Persons (IDPs) affected by the insurgency.

President Muhammadu Buhari had inaugurated the Presidential Initiative on the North East in 2015 to address the crisis in the north east.

The Senate consequently set up an ad-hoc committee at their first legislative proceedings for the week on Tuesday at the National Assembly in Abuja, Nigeria’s capital.

They expressed concern that funds appropriated to the committee for the displaced persons have been allegedly used to take care of other interests.

The lawmakers also resolved to investigate the purported diversion of grains and other food items from the strategic grains reserve, the National Emergency Management Agency and other sources for the IDPs.

They asked the committee to ascertain how much has been released to the committee and how the funds have been utilised from inception till date.

The Senate noted that the displaced persons had fled their homes as a result of the Boko Haram insurgency and were living in IDPs’ camps scattered across the northern part of Nigeria.

They were sad that despite the fact that the insurgency victims lost their loved ones and all their property, they were contending with horrific living conditions in their various camps.

UNICEF has raised concerns of acute malnutrition in children, nursing mothers and pregnant women in the region that has seen over six years of insurgency.

While the military decimate Boko Haram militants in the region, the United Nations agency said it had become difficult for aid materials to get to the displaced persons.

The agency fears that if nutritious food items do not get to the IDPs in the region, 49,000 severely malnourished persons were at the risk of death.

The Internal Displacement Monitoring Centre, a leading source of information and analysis on internal displacement worldwide, in its latest figures stated that about 2,096,000 people have been displaced in armed conflicts along the North East axis of Nigeria.

This agrees with figures listed by the Displacement Tracking Matrix of the International Organization for Migration.

IOM says between 2014 and 2015, some 200,000 refugees fled across the borders from north-east Nigeria into Cameroon, Niger and Chad, many of whom have since been repatriated and are now among the IDPs in Nigeria.