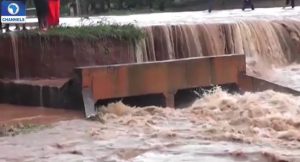 The Ogun State government has told survivors of flood ravaged communities along the Ogun river bank to relocate in order to avoid being caught unawares by another incident.

The State Commissioner for Environment, Mr Bolaji Oyeleye, issued the warning in a statement.

The statement read: “the Ogun State Government wishes to draw the attention of the public to the recent river flooding that has affected some areas in Ifo and Obafemi-Owode Local Government Areas, namely Kara, Isheri, Denro, Akute, Wawa and Warewa”.

Mr Oyeleye, explained that adequate preparations had been made in case of further emergency.

This is after residents complained that the government had not done enough to stem the recurring problem and cried out for their intervention as the flood lingers.

Ogun State is one of the 14 flood-prone areas named in a warning issued by the National Emergency Management Agency, (NEMA). Some of the States have experienced recurrent flooding.

The flooding incident has also affected various states and communities across Nigeria and as a result, lives and huge amount of property have been lost.

NEMA and various state governments assert that adequate warnings had been sent through various sensitisation avenues. However, some residents of affected areas adamantly refused relocating ahead of the flood incidents, the agency says.

Several affected states have begun counting their losses and forging ahead in attempts to avoid a recurrence.

Osun is one of those states and the government has taken active steps such as dredging waterways to improve the drainage systems.