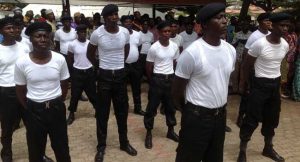 The Ekiti state, the State Governor, Ayo Fayose, has inaugurated the Ekiti Enforcement Marshals with a charge to carry out their duties in the overall interest of Ekiti people.

This is in a bid to prevent the re-occurrence of Fulani herdsmen attack in the state.

The enforcement marshals who are vested with the responsibility of arresting cattle grazing within Ado Ekiti the state capital and other parts of the state are to ensure the restriction of cattle movement between 7am and 6pm.

The law has, however, been inactive in terms of enforcement.

The law provides amongst others that: “No person shall cause or permit any cattle or other ruminants belonging to him or under his control to graze on any land in which the Governor has not designated as ranches, no cattle or other ruminants shall by any means move or graze at night and that cattle movement and grazing are restricted to the hours between 7:00 am and 6:00 pm.”

The law also prescribed punishments for offenders, such as charging of any herdsmen found in possession of firearms and other offensive weapons with terrorism, payment for property or farm products destroyed by the cattle by the herdsmen and keeping of confiscated of cattle at Government cattle ranches.

Governor Fayose while inaugurating the Ekiti grazing enforcement marshals, charged them to carry out their jobs diligently.

He said: “The reality we must all face is that cattle farming is not different from fish farming, snake farming, poultry farming, snail farming, etc.

“Therefore, if fish farmers are providing their own ponds and poultry farmers building their own pens, while also buying feed for their animals, there is no reason cattle farmers should not also provide their own ranch and feed their cows without encroaching on other people’s farmlands.”

He urged members of the public to join in the crusade to “free the state from the menace of herdsmen by offering information to the Grazing Enforcement Marshals”.

Stakeholders who spoke with newsmen during the inauguration of the enforcement marshals commended the Governor for the initiative.

Among them was a traditional ruler, the Onire of Ire Ekiti, Oba Victor Bobade, who noted that the enforcement of the new law would bring relief to farmers in the state.

Banditry/Terrorism: Northeast Governors Advocate Use Of Heavy Artillery By Police