What Anglican Primate Wants Buhari To Do About Corruption 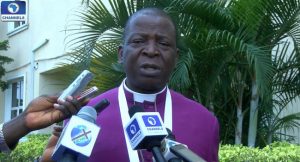 ‎The Primate of the Anglican Church, Most Reverend Nicholas Okoh, has given his opinion on how the Nigerian government should address corruption in the oil-rich nation.

He made the comment in reaction to the arrest of some judges few weeks ago by security operatives.

The judges were alleged to have been involved in corrupt practices and misconduct.

But the Primate says only the court can find the judges arrested guilty of any crime.

“It all depends on what eventually is said about the judges concerned.

“If they are found guilty, then it will not affect anything because the crusade would have been a right one.

“If they are found to be innocent, then the call will be for the government agencies in charge to take it easy so that they do not blackmail the government they are trying to serve,” he said.

Addressing reporters at the Anglican Women’s Conference in Abuja on Saturday, Most Reverend Okoh said that the fight against corruption was an indictment on all Nigerians.

He explained that corruption cuts across the entire system in Nigeria and that the government should extend the fight against corruption to the grassroots.

“The crusade about corruption is an indictment on all of us, because what I have continued to appeal to government is that after the top echelon the crusade should be spread down the line.

“If you go to even the most local market, you will find corruption there. They people selling groundnut they are involved in corruption.

“The university teachers are involved in corruption those of us in the church in one form or the other. So, no one is actually spared.

“What it means is that we have all been sensitised and every nook and corner of the country should be focused to ensure that we produce a better generation after our own that will be free from corruption,” he emphasised.


The government had extended its anti-corruption war to the judiciary, arresting some judges, whom the Department of State Services (DSS) said were suspected for corruption and misconduct.

Since their arrests on October 7 and 8, diverse reactions trailed the action, with the latest from the National Judicial Council (NJC).

The leadership of the NJC in a statement on Saturday condemned the sting operations carried out by the DSS against some judicial officers, saying it was a clear assault on the independence of the Nigerian Judiciary.

It said it had started investigation into complaints it received against the judges.