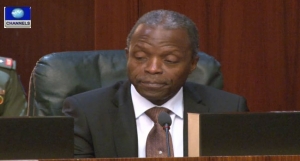 Nigeria’s Vice President, Professor Yemi Osinbajo, is currently presiding over a meeting with state governors at the Council Chambers of the Aso Rock Presidential Villa in Abuja.

Other members of the National Economic Council are also present at the meeting.

It is not clear what the agenda of the meeting is, but it is likely to be on the state of the nation and perhaps how the governors can contribute in getting Nigeria out of recession through collaboration with the Federal Government.