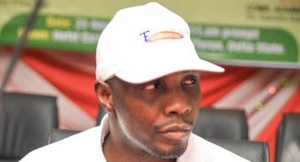 The Federal High Court sitting in Lagos, on Tuesday, fixed December 12, 2016 to rule on whether or not to transfer to the Court of Appeal, a suit filed against the federal government by former militant leader, Government Ekpemupolo, popularly known as Tompolo.

Justice Mojisola Olatoregun fixed the date after hearing arguments from parties involved in the matter.

Tompolo, who is wanted by the EFCC over alleged fraud worth 49.5 billion naira, sued the federal government through his lawyer, Mr Ebunolu Adegboruwa.

He is seeking an order restraining the federal government and its agencies from further proceeding with the fraud charges.

The Federal Government had in May 2016 asked the court to dismiss with cost the suit filed by the former Niger Delta militant leader.

The government said that the suit is an abuse of court process, frivolous, time wasting, grossly misleading and erroneous in its totality.