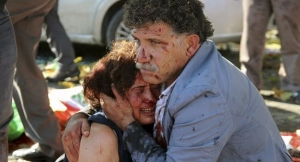 Activists say more than 20 people, mostly children, have been killed in air strikes on a rebel-held village in north-western Syria.

A school complex was reportedly among several locations targeted in the village of Haas, in Idlib province.

The Syria Civil Defence, whose rescue workers are known as the White Helmets, confirmed that a complex containing three schools was targeted.

Although it was not immediately clear if the raids were carried out by Syrian government or Russian warplanes, the state media quoted a military source as saying several “terrorists” had been killed when their positions were hit.

The incident comes as the government and its ally, Russia, said they would continue a moratorium on the aerial bombardment of besieged, rebel-held eastern districts of the city of Aleppo.

Idlib is considered one of the last strongholds of the Syrian oppositions and according to BBC reports, the attack on Haas, about 75km (46 miles) south-west of Aleppo, appeared to have been intense.

The Syria Civil Defence said initial reports were of more than 20 people being killed, while the UK-based Syrian Observatory for Human Rights put the death toll at 22, including 14 children and a teacher.

Guinea Set To Vote Over New Constitution Despite Protests