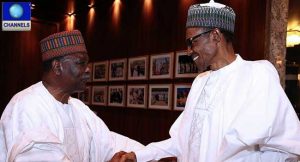 President Muhammadu Buhari has met behind closed doors with a former Head of State, General Yakubu Gowon (Rtd) at the Presidential Villa.

The meeting was held inside the President’s office for about 30 minutes.

The former military leader did not speak to reporters after the meeting.

The meeting of the two leaders was the second one in two months. The first was in August, just before the former head of state travelled abroad.

Among other matters, the August meeting focused on the Buhari administration’s anti-corruption campaign, which the former leader expressed support for.

In a chat with newsmen after the meeting, he encouraged the Nigerian leader to deal with the situation which he said had created serious setback to Nigeria nationally and internationally.

He also expressed delight at the Federal Government’s determination so far in the fight against Boko Haram insurgents and efforts to rescue the missing Chibok girls.

General Gowon said at the time that the government would soon get credible information that would lead to the rescue of the girls abducted in April 2014 from their school’s dormitory in Borno State.

He urged Nigerians to be patient with the President who he said took over power at a time Nigeria was witnessing dwindling crude oil price.

It was the same month that President Buhari agreed to the idea of swapping Boko Haram prisoners for the Chibok girls and just as Gowon predicted, the government went on to secure the release of 21 of the abducted Chibok girls.

The release was the outcome of negotiations between the Nigerian government and the Boko Haram, brokered by the International Red Cross and the Swiss Government.

President Muhammadu Buhari has also said his government would sustain efforts to free the remaining girls, kidnapped by the jihadist group.