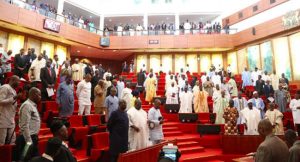 The sponsor of the Sexual Harassment in Tertiary Institutions Bill, Senator Ovie Omo-Agege, has reacted to the Senate’s decision to pass the bill.

Senator Omo-Agege told reporters in Abuja on Friday that the Senate passed the bill to put an end to the rampant cases of harassment of students by lecturers and educators in institutes of higher learning.

The Senate on Thursday passed the bill which seeks to stop sexual harassment, prescribing a five-year jail term and five million Naira for lecturers and educators convicted of sexually harassing male or female students in any institution.

The bill also recommends expulsion or suspension for students whose claims of being sexually harassed by lecturers or educators are found to be false after investigations in court.

Several lecturers have been claims by students that of some lecturers seek sexual gratification from them and deliberately victimise them to make them submit to their demands.

The legislation if passed to law would give such students a backing to seek redress.