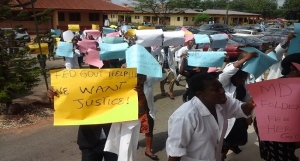 The Nigeria Labour Congress (NLC) and Trade Union Congress (TUC) have given the Federal Government of Nigeria a 21-day ultimatum to resolve the industrial crisis at the Federal Medical Centre (FMC) in Owerri.

The ultimatum is contained in a letter to President Muhammadu Buhari and the Minister of Health, Professor Isaac Adewole.

The unions asked the government to summon the Chief Medical Director of FMC Oweri, Mrs Angela Uwakwem, to answer the cases she has with the Economic and Financial Crimes Commission (EFCC).

They claimed that her return to the hospital at a time she was being prosecuted by the EFCC was a violation of the civil service rule.

Reacting to the allegation, the Mrs Uwakwem stated that her accusers cannot be the judges in their own case.

The Federal Government had earlier announced her reinstatement as the substantive Medical Director of FMC Owerri, after about 10 months of stepping aside.

The directive for the recall was contained in a statement issued by the Minister of State for Health, Dr. Osagie Ehanire.

The government insisted that it has not found Uwakwem guilty of the allegations levelled against her.

The development consequently triggered series of protest by health workers and labour unions at the health institution in Imo State, southeast Nigeria.

The workers vowed not to return to work until their demand was met.