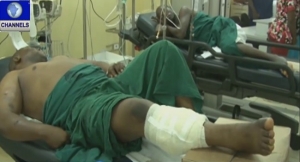 Physiotherapists in Nigeria are lamenting that the profession is yet to be given its due recognition by government in spite of the major role they play in the overall well-being of citizens.

President of the Nigeria Society of Physiotherapists, Dr Taiwo Oyewumi stated this at the 56th annual scientific conference of the association in Kaduna state.

While lamenting the lack of conducive working environment for the practitioners, he said that physiotherapists in Nigeria are ready to pilot projects that would make the country a medical tourist destination.

According to experts, Nigeria presently has only one physiotherapist attending to 30 patients in most hospitals across the country, a situation experts in the study and practice of Physiotherapy say it is a far cry from the World Health Organisation’s recommendation.

The World Health Organisation recommends one physiotherapist to eight patients.

President of the association attributes the situation to lack of adequate recognition of the profession by government.

Chairman of the association in Kaduna state, Stephen Obajuluwa, lamented that the state has only seven physiotherapists to carter for the over eight million citizens of the state.

This figure, he said, is totally unacceptable.

He called on the state government to create more awareness on physiotherapy in the 23 local government areas of the state.