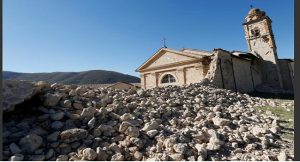 A powerful earthquake struck Italy on Sunday in the same central regions that have been rocked by repeated tremors over the past two months, with more homes and churches brought down but no deaths reported.

The quake, which measured 6.6 according to the U.S. Geological Survey, was bigger than one on Aug. 24 that killed almost 300 people. Many people have fled the area since then, helping to avoid a new devastating death toll.

The latest quake was felt across much of Italy, striking at 7.40 a.m. (0640 GMT), its epicenter close to the historic Umbrian walled town of Norcia, some 100 km (60 miles) from the university city of Perugia.

Panicked Norcia residents rushed into the streets and the town’s ancient Basilica of St. Benedict collapsed, leaving just the facade standing. Nuns, monks and locals sank to their knees in the main square in silent prayer before the shattered church.

“This is a tragedy. It is a coup de grace. The basilica is devastated,” Bishop Renato Boccardo of Norcia told Reuters.

“Everyone has been suspended in a never-ending state of fear and stress. They are at their wits end,” said Boccardo, referring to the thousands of tremors that have rattled the area since August, including two serious quakes on Wednesday.

Italy’s Civil Protection unit, which coordinates disaster relief, said numerous houses were destroyed on Sunday in the regions of Umbria and Marche, but either they were deserted at the time or most of the residents managed to escape beforehand.

“No deaths have been reported, but there are a number of people injured,” said Civil Protection chief Fabrizio Curcio, adding that just one person was in a serious condition.

Prime Minister Matteo Renzi said Italy was living through extremely difficult times, but promised a massive reconstruction effort in the years ahead regardless of any possible objections from the European Union over the eventual costs.

“We will rebuild everything, the houses, the churches and the businesses,” Renzi told reporters. “Everything that needs to be done to rebuild these areas will be done.”