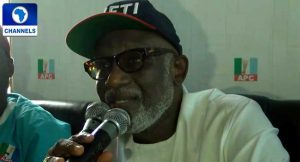 The candidate of the All Progressives Congress(APC) for the November 26, 2016 election in Ondo State, Olurotimi Akeredolu has appealed to members of the party to be united and work for the success of the party in the election.

Akeredolu stated this while meeting with APC women leaders in the 203 wards in the state, at the party secretariat in Akure, the State Capital.

According to the APC candidate, the party controls 22 out of the 36 states of the federation and Ondo cannot afford to go with a party that is dead.

He noted that it will be beneficial for the people of the state, if APC is united, thereby calling on women to take up the task.

“We cannot go to a party that is dead, you cannot resurrect a dead person, the important thing for us is that in APC we must have a cohesion, Ondo State is the only state with gas in abundance in the South West to generate light for other states.

“That is what we can achieve if we cannot go to any other party and think we will have any benefit. “For the benefit of our people in the state, we must remain in APC, we must ensure that APC government is in place and we call on our women to do that job.”

The wife of Mr. Akeredolu, Betty Akeredolu on her part emphasized the need to kick out poverty among the women folk in the State. She assured that the administration of Akeredolu will empower women to earn a decent living, no matter their profession.

In her words” we have to kick out poverty, it is very important. “If our women are empowered to earn a decent ‎living no matter their profession is, they should be able to earn a decent living and with that they can take care of their families so Aketi regime will make sure that we arrest poverty in Ondo State.”

Two of the women leaders spoke to Channels Television on the purpose of the meeting, calling on the women in the state to support the party massively as it is the only party where their aspirations can be met.

One of the women, Oladunni Odu explained in her interview, “We have invited women from all over the state so that they can see our programmes and we are going to have women programmes, talking to professionals, market women all over the state, the more you have the better for us.”

While the other, Mrs Yetunde Adeyanju said, “This is where the aspiration of women in Ondo State can be met. There’s room for women in APC as you can see, everybody’s charged now and we are all coming out”.