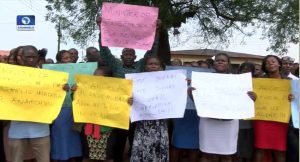 The Medical Director of the Federal Medical Centre Owerri Mrs Angela Uwakwem on Tuesday, appeared before an Owerri high court, on an 18 count charge, bordering on financial misappropriation and embezzlement to the tune of 242 million Naira.

The medical director was arraigned by the Economic and Financial Crimes Commission (EFCC), following a petition by the (Joint Health Sector Union) JOHESU Of the Federal Medical Centre, Owerri.

During the first sitting of the case at the Owerri high court, counsel to EFCC, Barrister Mainforce Ekwu, alleged that according to the petition, Mrs Uwakwem, conspired with one Mr Emmanuel Ajayi, to inflate the price of medical equipment bought for the centre.

Barrister Ekwu also told the court that the Medical director should be remanded in prison, since the accused failed to appear before the court on October 10, 2016, after being served court summon, to which her lawyers confirmed receipt.

The defense counsel and lawyer to the Medical Director Chukwuma Ekomaru, S.A.N, however challenged the argument of the complainant.

He claimed that on October 10, his client was in court but after waiting for a while, there was an announcement that the court will not seat and they all dismissed.

Ekomaru, then urged the court to grant her client bail and also strike out the case for lack of merit.

Mrs Uwakwem on the other hand, pleaded not guilty to all the 18 count charge leveled against her.

In her Judgement, the presiding Judge, Justice Florence Duruoha-Igwe, granted the accused bail on grounds that she did not jump bail.

Also she said for her to attend further proceedings from her home, she would have to present two sureties to the court, who are resident in Owerri with a landed property and the sum of one million Naira.

While the counsel to EFCC refused to speak to journalists, Mrs Uwakwem’s consel, Ekomaru, told journalists that the case lacked merit as the union has failed in all ramifications since they refused to adhere to the constitution of Nigeria.

“It is a shame that the Union in FMC could go this far to tarnish the image of a woman who has done well for the Centre,” he expressed.