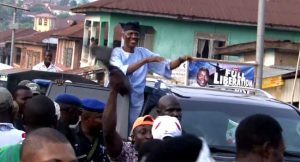 #EndSARS: UK Parliament Does Not Speak For British Govt – FG