Why Mikel Obi Could Leave Chelsea In January 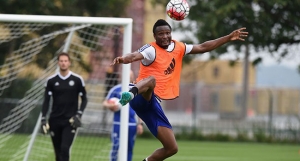 Chelsea midfielder, Mikel Obi has hinted he may leave the Premier League club in the January transfer window.

Mikel has been with Chelsea for 10 years and is their second longest-serving player behind captain John Terry but is yet to play this season.

Since arriving at Stamford Bridge in 2006 for a fee of 16 million pounds, the Super Eagles captain has won two Premier League titles, four FA Cups, the Champions League and the Europa League.

Asides the need for playing time having failed to play a single minute in the current season, there are also rumours that he has been offered an incredible $212,000-a-week deal by Chinese club, Shanghai SIPG.

Yaya Toure’s glorious two-goal return to Manchester City line-up from a similar situation could be a reason for Mikel to consider persevering but Chelsea’s great form lately means there is no weak link in the Chelsea midfield for Mikel to benefit.

While these seem to justify a move away, Mikel however, has promised to do his best when called upon to play for the London based club.

“I have never been a guy who made excuses in life, I never shy away from my responsibilities,” Mikel told BBC Sport.

“I have to keep training hard and make sure I change the manager’s mind. I have been professional, I train and work everyday with the team and I hope one day I will get to play.

“I have written my name in the history of this football club and I have won loads of trophies. I have played close to 400 game and have no single regret.

“I still want to win more and help the team. Players move on in life but I am relaxed about January. I will speak to the club find the best solution.”