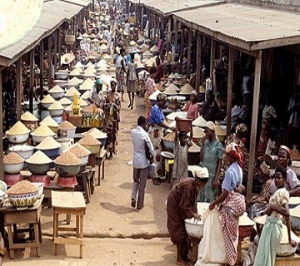 The popular Fayose market in Ado Ekiti, the state capital has been closed following the order of the State Governor, Ayodele Fayose for not complying with the rules and regulations of the market.

Channels TV correspondent reports that the market has been under lock and key for the past few weeks and this has not been the best of time for the traders, considering the season and as the yuletide approaches.

The Commissioner for Information, Lanre Ogunsuyi, has explained that “the market was closed due to the attack on the enforcement officers of the state government, (and) for now the market remains closed until the traders learn their lessons”.

The Governor has also explained that the market was closed “for not complying with the laws and order rules guiding the market”.

He said that traders should see themselves as brothers and respect the state government order.

Traders in the market have been warned in the past to stop obstructing access roads and walkways with their goods.

Efforts have been made by the traders to appeal to Governor Fayose for an amicable resolution of the matter but the efforts have not yielded the desired result.

For now, traders remain on the streets hoping that the market would be opened as soon as possible.

Kaduna Has Attracted Over $800m Of Investments Since 2016 – El-Rufai