Makarfi’s Refusal To Step Down Is Hampering Reconciliation – Gulak 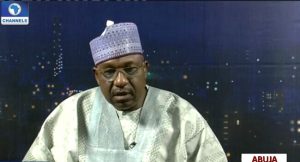 A chieftain of the Peoples Democratic Party (PDP) says reconciliation of the factions in the party was scuttled by the chairman of the Caretaker Committee, Senator Ahmed Makarfi, whom he said had not given his consent to a reconciliation requirement.

Giving his opinion on the crisis in the party, Mr Ahmed Gulak, said that Senator Makarfi had, at a reconciliation meeting, refused to accept the condition that Senator Ali Modu Sheriff and himself should step down for a fresh start.

The PDP chieftain said that Senator Sheriff, whom he said is still the chairman of the party, had accepted to step down, but Senator Makarfi’s refusal has scuttled the whole process.

He insisted that reconciliation was the way forward.

“Sheriff and Markarfi were called and sheriff agreed to step aside but Makarfi refused, saying he must consult with some governors.

“If it is the intention of these governors and Makarfi that this party should remain united, then the needful should be done,” he said.

On the leadership of the party, Mr Gulak insisted that “the authentic chairman of the party as of now is Senator Ali Modu Sheriff.

“A court of competent jurisdiction has pronounced that only Senator Sheriff can parade himself as the national chairman of the party. The same court barred Senator Makarfi Caretaker Committee from parading themselves as the caretaker committee acting for and on behalf of the party.

“The simple reason is, no gathering can pass a national convention when there is a subsisting court order barring the party from conducting a convention or electing principle officers,” he explain.

On the chances of the PDP putting a strong opposition against the ruling party in coming elections, Mr Gulak said that “in few weeks, you will see the vibrant opposition that the PDP will give the APC”.

“We are trying to pick the pieces to rebuild,” he added.

Three Killed As Truck Plunges Into River In Lagos