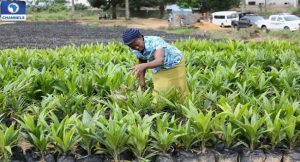 Abia State government has signed an agreement with a private investor that may see the state become the largest palm producer in Nigeria.

The State government says the Memorandum of Understanding will produce an Abia State Palm Estate in Ohambele in Ukwa East Local Government Area of the state to increase the wealth of the State.

The Palm Estate is expected to support the governor’s drive to restore the state as the number one palm producer and create jobs for youths.

The Commissioner for Agriculture, Mr Uzo Azubuike, assured the investor that the state government would keep their part of the agreement.

He highlighted that the state government was in a hurry to return the state to the years of palm plantations dotting the landscape of the state.

“Part of what we are signing now is that the private investor, S-ATM Nigeria Limited will build an oil mill inside the Palm Estate here in Ohambele.

“This palm estate is expected to employ more than 5,000 Abians, with greater percentage of the employment from the Ohambele community.

“The government will leave no stone unturned in bringing to materialisation one of the pillars of this administration in the area of revitalisation of agriculture,” he told the investor.

Meanwhile, the investor and his bankers expressed appreciation to the State government for providing the enabling environment for them to do business in the state without excessive bureaucratic bottlenecks.

The Managing Director of S-ATM Nigeria Limited, Mr Ogunleye , assured the state government that his company would fulfill the terms of the agreement which include investing the needed funds to realise the goals of the state palm plantation which is to reduce unemployment.

“My assurance to you is that more than 40 per cent of the company’s employees will be Abia residents and also the members of the host community, thereby reducing the rate of unemployment in the state,” he told the state government official.

The investor and his bankers expressed appreciation to the State government for providing the enabling environment for new investors to do business in the state without excessive bureaucratic bottlenecks.

Kerosine Explosion: One Dead, 16 Others Severely Burnt In Calabar