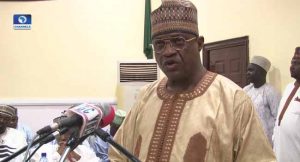 The Yobe State Governor Ibrahim Gaidam, on Friday, presented the 2017 appropriation and finance bills to the state assembly for its scrutiny.

In the 2017 budget, the Governor said his administration intends to spend the sum of 69.3 billion Naira, which represents a 22% reduction to that of the outgoing fiscal year.

He told the House that in the 2017 fiscal year, government is earmarking 39.5% to cater for capital expenditure, while the recurrent expenditure is put at 60.5%

Tagged “budget of consolidation and self-reliance”, it also represents a decrease of 19.5 million Naira, compared to that of last year.

Governor Gaidam said the down size will ensure budget realism for the attainment of realistic results in the implementation of earmarked programmes.

“This decision is informed by the economic recession, occasioned by the fall in price of oil and consequent need to ensure budget realism for attainment of optimum result in the implementation of planned programmes.

“In spite of the daunting challenges experienced as a result of paucity of funds at the disposal of government, we still remained focused to make concerted efforts, aimed at improving the quality of life of the citizens of the state” the Governor said.

The 2017 budget according to him, is to be executed with funds to be generated from internal revenues, statutory allocation, value added tax, ecological fund, excess crude oil, external and internal loans among others.

Giving a review of the 2016 budget performance, Mr Gaidam said of the 88.9 billion Naira estimated for the year, the total revenue received from all sources covering the period from January to November, amounted to 49.8 Naira giving 56.1% of the required target for the year.

The Governor called on well-meaning people of the state and other interested parties to support his administration in the realization of his developmental objectives.

“In the implementation of the budget, we will involve every patriotic citizen of Yobe, our development partners and indeed all other stakeholders to make meaningful contributions towards realization of the set developmental objectives.

“In so doing, emphasis shall as usual be placed on observance of due process, probity, accountability and transparency, which are the essential hallmarks of good governance” Gaidam said.