Nigerian Refugees In Cameroon Get Food Aid From NEMA 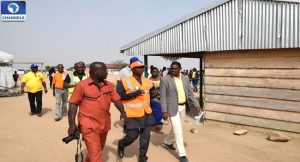 About 80,709 Nigerian refugees, mostly from Borno State, in the Republic of Cameroon, have received 1,460 bags of assorted food items from the National Emergency Management Agency (NEMA).

The items, which were delivered at the weekend, were handed over to the displaced persons on behalf of the Nigerian government for the feeding of the refugees displaced by Boko Haram insurgents in Nigeria’s northeast.

They are taking shelter in Minawao and other locations in the far north region of Cameroon.

According to the Director General of NEMA, Muhammad Sidi, who was represented by the Agency’s Director of Search and Rescue, Air Commodore SBB Muhammad, handed over the items to officials of Cameroon for onward presentation to the United Nations High Commission for Refugee (UNHCR) which has been managing the camp.

He said the items were meant to provide succour to the Nigerian refugees.

In his message, the Director General said NEMA would continue to liaise with the Government of the Republic of Cameroon to ensure that all Nigerian refugees were living in good condition.

Mr Muhammed appealed to youths in the camps to desist from using drugs and urged them to always “be of good character and be good ambassadors of our country”. Some youths in the camp were recently arrested for drug use.

He assured the refugees that the Nigerian government had not forgotten them and that the government was doing everything possible to evacuate them back to their respective states.

The NEMA boss also thanked the Republic of Cameroon, INGOs and UNHCR on behalf of the Federal Government of Nigeria for hosting and providing them with protection.

Appreciating the efforts of the Nigerian Government, Vice Chairman of the Nigerian Refugees, Mr Asshigar Mohd, from Bama Local Government, said: “We have been in Minawao camp for three years, we do have regular feeding, have school and hospital, but we want leaders of our communities back home to visit us”.

He appealed to the Nigerian government to evacuate them to their places in Borno State since peace had returned in most of the communities.

At least 239,000 Nigerians are still refugees in neighbouring countries where they fled to in the heat of insurgency in the oil-rich nation’s northeast, an emergency management agency has said.

The figure was contained in a report of humanitarian relief intervention by the National Emergency Management Agency (NEMA) released recently.

It also says that about 29, 581 Nigerians, who fled their communities in Borno, Yobe and Adamawa to Republic of Niger and Cameroon as a result of insurgents’ activities had voluntarily returned to Nigeria.

According to the report, 13,046 Nigerians returned from Niger Republic in May, 2015 and were received in Geidam, Yobe State while Between April and December, 2015 NEMA received about 16,595 Nigerians that have voluntarily returned from Cameroon through the Sahuda border crossing area near Mubi in Adamawa State.

750 Families To Get Permanent Shelters In Borno