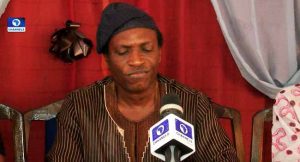 Father of the late Kano Corps member, Wale Oladepo, is accusing the National Youth Service Corps of contradictory statements leading to the death of his daugther Dolapo Oladepo.

It is the first time he is addressing the media and in an emotion-laden speech in Osogbo the Osun state capital on Monday, Mr Oladepo asked NYSC to give full details of what transpired during the last hours of Dolapo’s life.

The family further accused NYSC of an alleged cover up in the process of burying the corps member who died at the Kano orientation camp.

“‎Apparently she was not taken to any tertiary hospital until she died, according to the medical certificate of the cause of death issued by Gwarzo General Hospital and I quote, “she died as i’m aware or informed on the 29th of November, 2016 at 4 am and the cause of death was septic stick and kidney injury”.

“So I’m worried about this report that she had urinary tract infection leading to kidney injury. Thus I wish to state for the umpteenth time that the cause of death as claimed by NYSC is simply contradictory! he blurted.

“May I also recall that as she conversed with me and the sister, the twisted tongue showed because her speech was slurred. We have strong cause to believe their account are mere fabrications,” Mr Oladepo stated.

Going further, the deceased’s father said “contrary to the report of Saturday Tribune, the NYSC has never been engaged in any communication nor any letter written to the family to consider autopsy.

He therefore believes there are concrete evidences to support the family claims, while stating that “all concerned are warned not to under estimate the veracity of such evidences and still attempt subverting the truth”.

“However, my hopes are high that the various concerned authorities in the land will all ensure justice is done and that our daughter, Dolapo, who courageously went to serve her father land does not die in vain,” he said.

A protest group under the aegis of concerned friends of Dolapo’s family, called on President Muhammadu Buhari to caution the Minister for Sports and Youth Development, Solomon Dalung, from making further inflammatory statements.

The group also raised concerns of transparency on the part of the investigative committee with the order for an autopsy to ascertain the cause of Dolapo’s death.

In the light of this, the family has now declared exhuming of Dolapo’s body as a last resort into the investigation.

Also at the conference, an interested party in the case, Federation of International Women Lawyers (FIDA) sought for justice and thorough investigation.

They said this would inform their decision on whether or not to sue NYSC.

Although the names of the members of the investigative panel are still unknown, one wish of the friends and family of Dolapo is to establish the cause of her death as poor health facility and negligence of health workers in NYSC camps, which they describe as “another death trap for promising Nigerians”.

Two Pastors Arrested Over Rape Of Corps Member In Rivers