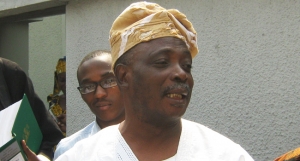 A former governor of Oyo state, Rashidi Ladoja, has been re-arraigned in court over fraud allegations.

He is charged alongside one Waheed Akanbi, of graft worth 4.7 billion Naira eight years after they were first arraigned.

The defendants pleaded not guilty to the 8-count charge and asked the court to allow them continue with the bail conditions granted to them in 2008.

In the charge, the EFCC had alleged that the duo conspired to convert properties and resources derived from an illegal act, with the intention of concealing their illicit origin.

The anti-graft agency also alleged that ex-Governor Ladoja used 42 million naira out of the proceeds to purchase an Armoured Land Cruiser SUV, and remitted about £600,000 to one, Bimpe Ladoja in London.

However, the counsel to the EFCC, Mr Oluwafemi Olabisi, asked the court to fix a date for the commencement of trial.

In its ruling, the court held that it could not deny the defendants bail, before adjourning till February 14, 2017 to begin trial.