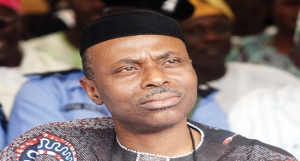 Ondo state governor, Olusegun Mimiko, has appealed to governor-elect, Rotimi Akeredolu ‎to be tolerant in power in order to sustain the peaceful atmosphere in the state.

Governor Mimiko stated this while the governor-elect paid him a courtesy visit at the governor’s office in Akure, the state capital. .

On his part, Mr Akeredolu said that the essence of his visit is to work with the government in preparation for ‎the transition.

Mimiko had promised to facilitate a smooth transition from his administration to that Akeredolu.

“It is incumbent upon me as Governor to facilitate a smooth transition between my government and the incoming one. I will, to this end, provide the ambience for a smooth and seamless transition process”.

While promising to continue to provide leadership to the State till the takeover date, Mimiko expressed his appreciation to the people of the State.

Akeredolu had also promised that there would be no inter-party division during his administration.

According to him, “my victory at the polls is not for me or for my party, the All Progressives Congress (APC), but for the entire people of the State, no matter their political divide.

While the governor-elect describe his victory as a manifestation of God’s power, he also stated that he would like to focus on the mandate rather than probe the past government.