FG Should Be Blamed For EFCC Appointment Saga – Robert Clarke 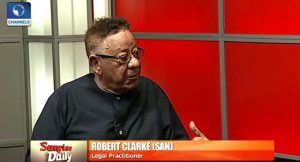 Veteran lawyer, Mr Robert Clarke, believes the federal government and not the Senate or the DSS should be blamed for the non-confirmation of Mr Ibrahim Magu as EFCC Chairman.

Speaking on Channels TV’s Sunrise Daily, Mr Clarke opined that the allegations against Mr Magu, upon which the Senate based its refusal of his nomination must have been known to the executive.

“There is no way DSS will just send a report directly to the Senate” he said, arguing that this information “passed through a conduit pipe created by the executive”.

He wondered why the Executive still went ahead to forward Magu’s name as nominee for the position when it must have received information that put his integrity under questioning.

“At that stage, why did they not hold on, call a meeting and call Magu himself and say ‘look we are going to withdraw your name’?

The Senate’s decision to reject Magu has generated controversy and Clarke believes that the embarrassment could have been avoided if the government had acted on the information and consequently prevented it from reaching the Senate.

He, however, believes that the revelation might not be a valid basis upon which corruption cases handled under Mr Magu’s leadership of the EFCC should be brought into disrepute.

The Senate has come out to say that it has not totally rejected Mr Ibrahim Magu but has only sent documents back to the executive. This Mr Clarke described as a case of “half a dozen and six”.

“Whichever language you use, it amounts to rejection. If I send a paper to you for approval and you say ‘I’m not rejecting your paper but I am not going to approve it. I will send it back to you’, what does that mean?

“It’s just the same thing. They have rejected him; let us be honest about it,” he said.